Trump and the Blood Libel

I have said before that Trump has intentionally evoked thinly veiled white supremacist rhetoric. I’ll cover a few instances of this before noting what I found most disturbing in his speech from Tulsa, and what it has to do with the ghastly painting, of which a detail is shown above, by an Italian artist.

Let’s begin with Tulsa (a place with an agonized history of racism). One example that might easily be missed without context is his comment about the ‘good bloodlines,’ of Henry Ford: “good bloodlines, good bloodlines — if you believe in that stuff, you got good blood.” On the surface, this seems like an odd way to praise someone. But to anyone familiar with the history of white supremacy and anti-Semitism, this ominous observation, particularly when made about Ford, is an outright endorsement of white supremacy.

Ford was a notorious anti-Semite, whose views were sufficiently virulent to earn him a by-name mention in Mein Kampf; the only American to earn such a dubious honor. Furthermore, Ford bankrolled the US publication of an anti-Semitic screed known as The Protocols of the Elders of Zion. While it may sound like the latest Dan Brown fantasy, it is a treatise on racism. Allegedly a medieval manuscript ‘discovered’ in the late 1800s, it purports to reveal the secret plans of a Jewish banking cabal to gain world dominion. Not surprisingly, it was proved to be a fake in 1921, but to Jew-hating whites on both sides of the Atlantic, it was the gospel of the racist. Ford distributed roughly 500,000 copies of the book throughout the 1920s, despite it having been revealed as a forgery in 1921. That is the man Trump is praising, but the use of the term ‘bloodlines’ may still be puzzling.

One group to enthusiastically embrace the fraudulent text of Protocols was a subset of Christianity known in Europe as British Israelism among other names, and which came to the US (thanks in part to Ford’s efforts) and became known as Christian Identity. The core principle of both is that Adam, and his bloodline, tracing down to Jesus, was white. The twelve tribes were white, and the progenitors of the Anglo-Celtic peoples. Whites are the true ‘chosen people’ of god, and other races are not just inferior, but, according to Christian Identity doctrine, the offspring of Eve and the serpent. You could be forgiven for wondering if I had not gotten my history confused with some lurid novel at this point, but I have linked sources below. Most important is that CI is still active today, and has more than a few religious organizations promoting its theology. Furthermore, diluted strains of CI flow through a lot of more mainstream evangelical churches.

That is the meaning of Trump’s bloodline comment about Henry Ford, the man who was instrumental in helping these ideologies to gain a foothold in the US. I can assure you, while his remark may have seemed odd to most of us, there is not a neo-Nazi in this country that did not understand with perfect clarity that Trump was endorsing their views along with one of their fathers in hate, Ford.

However, that is far from Trump’s only dog whistle to an overtly white supremacist ideology. The release of a t-shirt by his campaign was widely criticized for bearing a disturbing resemblance to the Nazi’s Imperial Eagle. He’s also used a red inverted triangle, used by Nazis used to designate political dissidents in concentration camps, leading Facebook to remove ads using the symbol. I won’t belabor those here, but there are references in the links sections below. And of course, his infamous comment in the wake of the white supremacist rally in Charlottesville, claiming there are ‘good people on both sides.’

But his Tulsa speech laid another brick in his foundation of embracing white supremacy. He claimed Biden specifically supported ‘after birth execution,’ referring to the lurid distortion of late-term abortion bandied about by the right. But that luridness in Trump’s speech is not new. Adherents at his rallies, in both 2016 and 2020 have repeated that they believe Democrats are not just killing babies. I’ll quote journalist Jeff Sharlet:

“…the first time I heard it at one of these rallies was someone saying, ‘You know what the Democrats are really up to.’ And I had heard all the conspiracy theories. The Pizzagate conspiracy theories about human trafficking, child trafficking. This took it to another level. They said, ‘They’re actually cannibals. They eat children.’ I said, this person must be mentally ill. This person must be fringe. But then I kept encountering that idea again and again. And now that’s moved the whole range of possibilities. So when Trump says plain out Biden supports post-birth execution, he is signaling to that audience that is ready to receive the message that your darkest fears, your most twisted fantasies of what your political enemies are up to, it’s all real.”

Recall Trump’s famous vignette: “It’s one o’clock in the morning and a very tough, I’ve used the word on occasion, a very tough hombre is breaking into the window of a young woman whose husband is away as a traveling salesman or whatever he may do.”

In other words, Trump, as he did in 2016 with his comments about Mexican rapists, is conjuring a villain, and making him the other, a dark-skinned, less than human savage prowling around looking to rape white women. This part has disturbing echoes of the rhetoric of the black man raping a white woman that accounted for too many lynchings in the American south, and which continues to this day.

This and his ‘killing babies’ remarks, and the implicit nod to all of his followers’ darkest fantasies, are warped by any metric. Trump has cast out crumbs for his followers along these lines before, as Sharlet mentioned. But oddly for Sharlet, a scholar of religious extremism in the US, he doesn’t note the part that I found most striking, particularly given the examples I’ve listed above. This rhetoric of ‘coming for your women,’ cannibalism, and ’killing babies’ evokes another canard of the anti-semitic white supremacist canon: the blood libel. 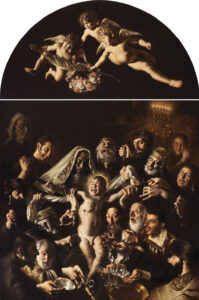 Full version of Gasparro’s painting (CW: it is disturbing).

If you’re not up on your medieval history, the blood libel can be traced back to at least the 12thC and became a common trope in the rhetoric that sparked pogroms, or murderous attacks on Jewish communities down through the centuries. The story was that Jews murder and eat Christian children in a ritual sacrifice; a warped understanding of the Passover seder. Some scholars have theorized there is a displacement at work here, which projects the psychological conflict engendered by a belief in literally eating the flesh of that chubby-cheeked child on Mary’s lap, but I digress. In any case, the blood libel persisted through the Renaissance, and right on into the modern era; though it is a point of history, it is also a point of current events.

A blood libel occurred in New York in the 1920s (right around the time Ford was passing around his copies of Protocols, and the newly reinvigorated KKK was gaining popularity). It is estimated roughly 1,000 pogroms occurred in Russia and Eastern Europe between 1867 and 1931. German newspapers reported on blood libels into the 1930s. Pogroms continued against Jews in Europe into the 1950s, and blood libels have been recorded in places like Russia, Algeria, Syria, and Poland, to name a few even in the 21st C. In 2014, the Anti-Defamation League had to pressure Facebook to remove pages dedicated to Jewish Ritual Murder. In 2020, renowned Italian artist Giovanni Gaspar unveiled a painting entitled The Martyrdom of St. Simon of Trento in accordance with Jewish ritual murder. (That’s the image above, and it is disturbing.)

Our history is also our present. While it seems outlandish to the point of tin-foil hattery to most of us, this rhetoric is still very much alive in the white supremacist circles, and those circles are far wider than you might think. These people are our neighbors, co-workers, relatives. And they believe these things, or as Trump put it, in an unmistakable wink. wink, nudge, nudge, “if you believe in that stuff…” They do believe in ‘that stuff,’ and Trump knows it.

Just a few years ago, I took a pair of (unapproved, of course) flyers down from a University of Louisville bulletin board, both emblazoned with a swastika and calling on white women to reject the ‘race mixing’ advances of black men and maintain their racial purity. A related thread of rhetoric in the incel community, populated almost exclusively by white men, revolves around shaming (and threatening) white women who date non-whites. This brings us back around to bloodlines. Trump has spoken dozens of times about his DNA, his genes, and how proud he is of his German ancestry. All of these cues, quirky, uninformed, or innocuous as they may seem to us, speak very clearly to those who know to listen for them. Now we need to listen, too, and understand what the man running for a second term in the highest office in the land, is really saying.

EDIT: I have linked several screenshots of comments on this painting when it came into the news. Please be warned: they are disturbing, hateful, and show a stunningly cavalier attitude towards racism and hate. 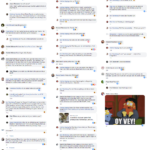 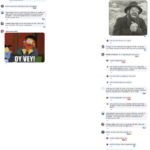 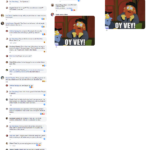 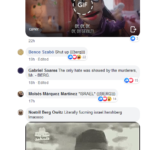 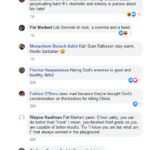 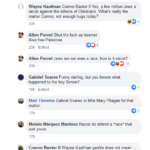 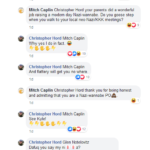 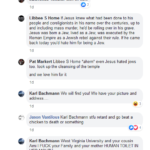 https://www.kingidentity.com/doctrine.htm (Warning, this is a primary source, straight from a currently active CI group in the US)